It was the worst nuclear accident in history— that’s the part everyone knows. What’s less known is that to this day many still choose to live their lives and raise their families in the shadow of Chernobyl. It’s to this world that acclaimed comics creator Emmanuel Lepage went, expecting monsters and discovering… beauty. With its ample knowledge, demand, elevated vocabulary, figurative language, and sophisticated storytelling, Springtime in Chernobyl has a high degree of text complexity. Yet with its engaging art, clear exposition, and personal voice, it is also highly accessible. In short, it’s a perfect interdisciplinary graphic memoir for your school or library.

A Note on Genre. Springtime in Chernobyl is at once a travel memoir, a historical account of an unprecedented disaster and its aftermath, and a personal narrative about what it means to be an artist who interacts meaningfully with the wider world. It is also, on every page, an example of creative nonfiction. One genre it is not, however, is a “graphic novel” as it is not fictional; in fact, you may want to explain that comics are a medium, and so can encompass every genre that prose text does.

Activities are provided for extended learning Content Area Reading In keeping with what NCTE champions as the “incorporation of disciplinary literacy instruction,” educators in the natural and social sciences are encouraged to include Springtime in Chernobyl in their curriculum. To this end, correlations to NGSS and NCSS standards are provided in the same way that CCSS correlations are for ELA educators. In addition, these ELA standards themselves appear in both the “RL” and “RI” strands, reflecting the text’s status as both literary and informational.

Suggestions on how to support readers and differentiate instruction.

Using this Guide : This guide has been designed to work with 9-12 students in a range of settings. So whether Springtime in Chernobyl is a close reading text for whole group study, a reading circle title for fans of graphic literature, or simply an independent reading option in your school or classroom library. 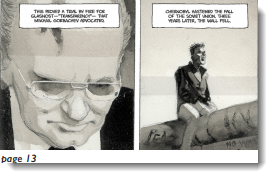 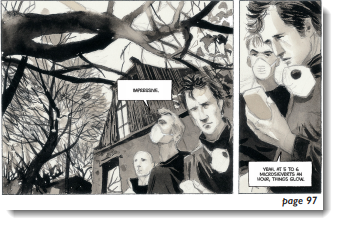 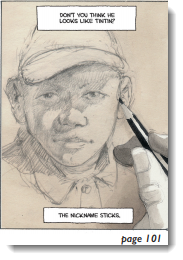 Have students share background knowledge to prepare them for reading, filling in any gaps yourself as needed.

Consider reviewing the basics of radioactive decay and its effect on living tissue, the work of Marie Curie, how nuclear reactors operate, and perhaps technical terms such as dosimeter and microsieverts.

Make sure students have a sense of the Cold War and its conclusion, and of the Soviet Union and its Communist system of government more generally.

You may want to practice navigating pages with students, reviewing as needed formal concepts such as panels, gutters, word balloons, and narration (or caption) boxes.

in addition to clarifying any slang or idioms (e.g., rubbernecker), consider pairing them with a native speaker to “act” the dialogue in difficult passages, using the art’s facial expressions, color choices, and mood to inform how they read/perform.

Coach them to pay closer attention to the art, using it as a source of visual context clues. In addition, you may want to translate in advance any passages with foreign languages such as Ukrainian or Russian.

Stimulate critical thinking by challenging them to track the numerous sketches Lepage makes of other people and then to contrast them with how those people “actually” look. Ask them to share any conclusions they can make about his creative process.

Standards-aligned discussion questions that can double as writing prompts/assignments

1. What is effect of reading excerpts from Nobel Laureate Svetlana Alexievich’s La Supplication while we travel into unknown lands? Why do you think Lepage chose to begin his book this way?
2. How would you evaluate the evacuation of the area surrounding Chernobyl? In what sense could the entire book be said to concern the consequences of the evacuation? 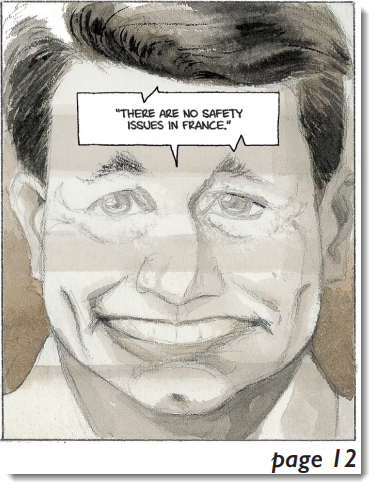 3. Compare and contrast the response of the Soviet Union and France to the Chernobyl disaster. What considerations made the latter downplay its effects? How is privately owned media similar to, or different than, state-run media in a time of crisis?
4. The Chernobyl disaster occurred decades ago. Is it fair to use it as a model in an argument for why nuclear power is inherently unsafe? And is such a question important to the author’s purpose in the text? Why or why not?
5. What are the most heartbreaking aspects of the Chernobyl disaster? To what extent is it impossible to capture real-life tragedy through words and pictures?
6. What can artists convey about a place such as Chernobyl that journalists and scientists can’t? And does it matter what kind of artist one is?
7. In what ways can comics lead to, in the words of the text, “real change”? Is this book an example of that—why or why not? Compare and contrast comics journalism with a more widespread art form, political cartoons.
8. Why do you think the author’s hand pain comes and goes mysteriously? Explain why you think it is, or is not, an entirely physical phenomenon? 9. Pages 40, 41, and 42 all end with images of Vassia. What are the important differences between them? How does Vassia embody hope and dread at the same time, a key theme of the book?
10. In what ways is the history of Chernobyl a “Cold War tale,” and in what ways is it not?
11. What effect does the “tick tick” of the dosimeter have in what is mostly a silent environment?
12. Is Victor someone we should feel sympathetic toward? What do you think the author feels about him? 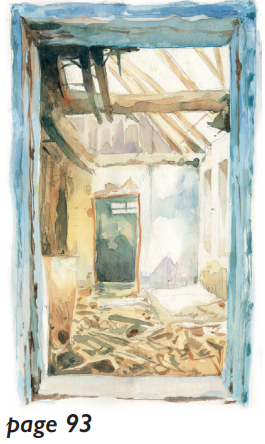 13. The text cites the “19th-Century romantic fascination for painting ruins,” but notes that in Chernobyl “guilt plays a part.” What does the author mean by this? Do you feel he is in any way exploiting the losses experienced by others? Be sure to support your response with textual evidence.
14. In what ways is the “zone” now serene and stable? In what ways does it only seem to be? Uncontrolled systems always evolve toward more stable states—that is, toward more uniform energy distribution (e.g., water flows downhill, objects hotter than their surrounding environment cool down).
15. Apparently Vassili feels that going into the zone without a mask makes one a “man.” What cultural values does such a belief reflect, and how does it perpetuate them?
16. When Anya says that “The people of Chernobyl are like uprooted trees,” why is the simile so powerful? Why did some older people return to the region despite the danger? How are they different than, or similar to, other refugees you may know about?
17. Evaluate Pascal’s dental x-ray experiment, and explain how you might improve upon it. What theory could be advanced by the evidence that is collected? 18. When Lepage is overcome by the calm and beauty of the abandoned highway in the forest, he says he “must resort to scientific artifice.” What does he mean by this? Is it somehow artificial or misleading to note the microsievert levels on each of his sketches? And does the situation help illustrate the difference between qualitative and quantitative approaches—why or why not?
19. “Where are the monsters?” Lepage asks, confused as to what sort of art he should be producing. Later he becomes worried that his book will not be sufficiently anti-nuclear. What would you tell him at such moments?
20. On pages 124-127 the author speculates about why people come to the edge of the zone. Do you agree with any of his ideas, or do you feel there are other reasons? Explain with evidence from the text, similar incidents or characters in literature, or from your own experience.
21. A favorite subject of visual artists across centuries and cultures has been the human figure against a much larger landscape. Compare and contrast the artwork on pages 136-137 with a painting, photograph, or film with similar subject matter. What is Lepage saying through his use of light and shadow, and foreground versus background? 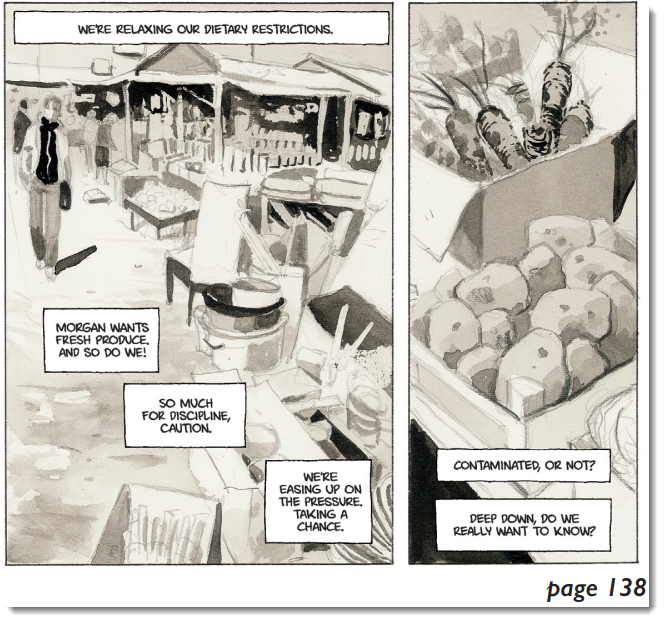 22. The text states that the farmhouse where the author stayed became a kind of “phalanstery”—a commune-like group where people work towards their mutual benefit. Was this a likely outcome given the setting, events, culture, and individuals involved?
23. Towards the end of the book, the author asks, “But aren’t people the same everywhere?” What evidence exists in the text that would lead him to think this?
24. The playfulness of the final pages recall an earlier idea—that Chernobyl may actually be “the land of childhood.” Has Lepage idealized the community he found? Why or why not? Given the Peter Pan motif and other thematic evidence throughout, how does the text establish that the author has rediscovered something essential and childlike about himself? 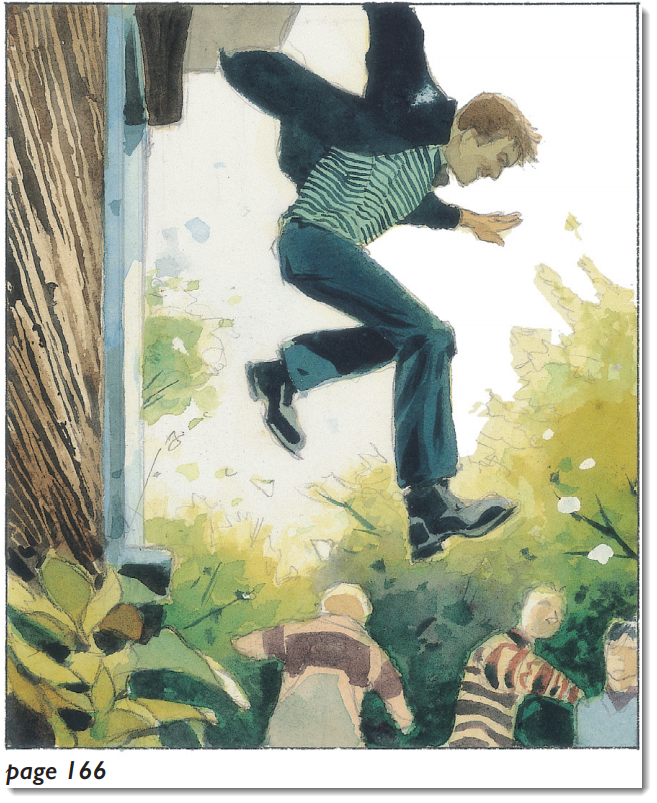 To see how each question specifically lines up to the standards download the full teaching guide below.

The expressiveness of Lepage’s art often lends it a “lyrical” quality. With this in mind, ask students to find a textless panel to use as a poetry prompt. Examples can be found on pages 123, 133, 156, and elsewhere.

At one point Vassili wonders aloud, “Why are you interested in us?”—to which Anatola adds, “There’s nothing here.” Challenge students to compose an essay that describes a setting that may seem empty or even bleak and yet nonetheless holds great meaning for them. Prewriting tasks might include taking photos or making sketches for reference.

On pages 82 and 83 Lepage takes stock of his early work, noting the fantastical scenes and worlds he was drawn to. Invite visual artists in any medium to curate a representative portfolio of their past work, and to draft a brief artist’s statement that provides insight on what’s been important to them and how they see their work growing and evolving over the years.

Collaborating with partners or in groups of three, students can create minicomics that capture a compelling time and place much as Springtime in Chernobyl does. The setting can be local or one that they have traveled to. Remind them to include a variety of text types such as captions, word balloons, and sound effects/music. Also, point out that the emphasis is on evoking that particular setting, not on establishing a narrative. 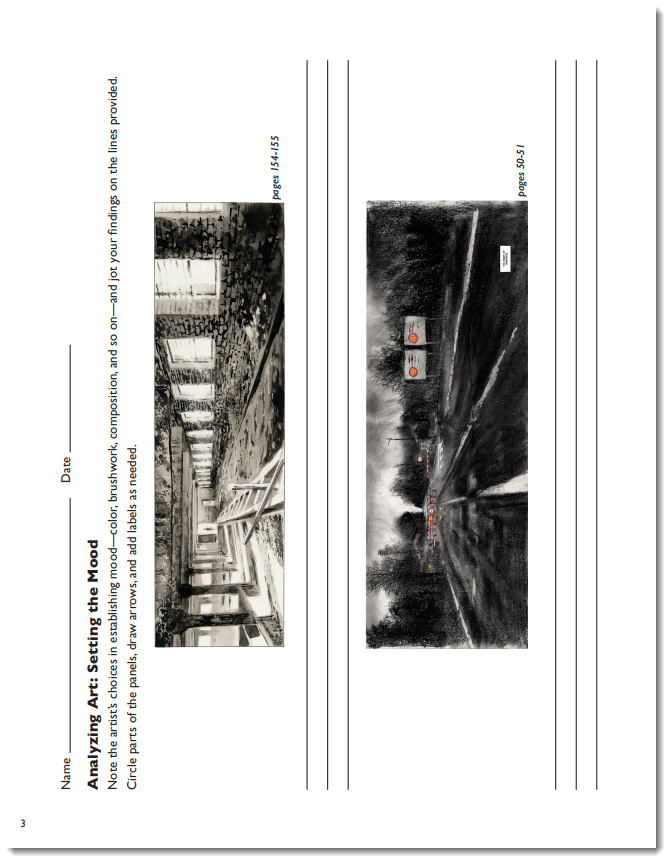 See PDF of Worksheet Below

FOR FURTHER READING AND VIEWING

The titles listed below touch on themes such as government’s mistreatment of citizens, life under Communism, resiliency, community, and the importance of a connection to the natural world. 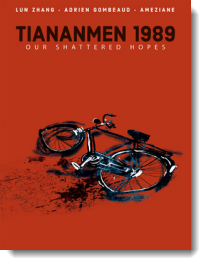 Springtime in Chernobyl’s excerpts from Svetlana Alexievich’s La Supplication may spark student interest in that book, whose English title is Voices from Chernobyl. A gripping oral history, it is full of firsthand accounts from liquidators, scientists, and the everyday people who were in Chernobyl at time of the accident. A thoughtful documentary adaptation of the book was released in 2016.

For a full PDF printout of the teaching guide, download the PDF below titled "Springtime In Chernobyl Teaching Guide", under attachments.