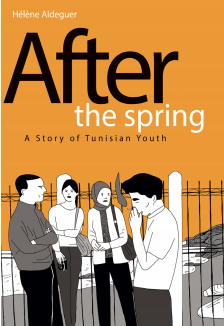 A Graphic Novel of Politics… and People

What happens when a revolution fails? That’s the question at the center of Hélène Aldeguer’s sophisticated and award-winning After the Spring. And while it’s a text rich in history, politics, economics, and human rights, its close focus on everyday lives ensures that such items do not remain abstract concepts but ring with immediacy. When encountering the group of young Tunisians who are the protagonists, students at the secondary level and above are sure to feel a relatedness to their own aspirations and anxieties.

THE NATIONAL COUNCIL FOR THE SOCIAL STUDIES

Correlations to NCSS’s Ten Themes of Social Studies:
In its own form of curriculum standards, the National Council for the Social Studies provides ten themes to organize teaching, learning—and, moreover, thinking—about key sub-disciplines and ideas. After the Spring addresses each of these themes:

IN YOUR CLASSROOM AND LIBRARY

With its academic content and engaging narrative, After the Spring can be read “across the curriculum” and in a variety of settings. While the aligned social studies connections are highlighted in the pages that follow, this is a graphic novel that is equally at home in an ELA or Literature classroom, given its multiple story lines and thematic complexity. In addition, its powerful artwork and compelling characters help make it a popular yet intellectually rigorous reading circle title or independent reading option.

Spotlight on Historical Fiction
The Common Core calls on reading standards to be applied to a “range of text types, with texts selected from a broad range of cultures and periods” and include the sub-genres of historical fiction and graphic novels. With this in mind, invite readers to consider how Aldeguer draws on the skills not only of visual storyteller, but also of a journalist and historian. With After the Spring serving as an exemplar text, students can explore central questions about the sub-genre such as…
• What is the optimal balance between history and fiction in historical fiction—or is such a question wrongheaded to begin with as it features a false dichotomy?
• How do details precise to a particular time and place actually help make a story more universal?
• How can historical fiction function as a memorial to individuals and groups who might otherwise be forgotten?

Prepare readers for After the Spring by providing background information as needed on Tunisia’s secularist political tradition and the dictatorship of Ben Ali (1987-2011). Then have students respond to the following.
• What was the “Arab Spring”?
• Where is Tunisia, and what do you know about the region?
• What pro-Democracy movements do you know about, and what characterizes them?
• What challenges do you think youth might encounter in times of political instability?

After the Spring addresses the National Council for the Social Studies ten themes, an alignment revealed by the following questions (which can be used as discussion questions, writing prompts, or a combination of both).

• Azziz claims that “Artists are a menace to our government.” What does he mean by this, and do you agree? Why?

• How have the characters changed by the end of the book, and in what ways do these changes reflect changes in Tunisia itself?
• What cycles of violence and protest seem to repeat themselves? 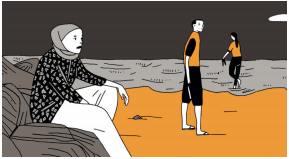 • How is life different in El Kef than in Tunis? What are the pros and cons of leaving the former for the latter?
• Does Chayma’s decision to emigrate to France say more about herself or the future outlook for Tunisia? Why?

• How does the author use pairs of characters (Walid/Saif, Azziz/Saif, Meriem/Chayma, Meriem/ Azziz) to compare and contrast the decisions and life paths of Tunisian youth?
• How do the same themes of family expectations, career options, and relationships manifest across different lives? 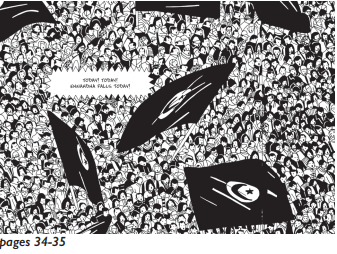 • How does the shifting point-of view give us an overall portrait of the nation? In what sense is Tunisia itself the protagonist?
• The author uses special word balloons when the crowd of protestors speaks as one (pp. 32-36). What other things could this group be shouting about the Ennahdha?
• Do you think the multitude of political parties in Tunisia helped or impeded progress toward a true and stable democracy?

• In what ways is assassination an ineffective way to hold or gain power? What happens when the public perceives the victim as a “martyr”?
• What was the relationship between dictatorship, torture, and propaganda under Ben Ali? In what ways is that dynamic not unique to Tunisia?
• How do events in Egypt affect Tunisia? To what extent do people really look outside their own country for models of power-sharing and governance?
• How important is the idea of the government’s “legitimacy” in the novel? What are some ways to gain legitimacy? 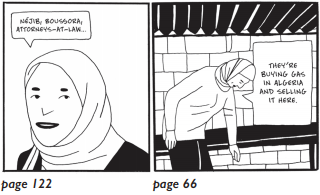 • Why is a general strike such a potent political weapon? Is it more so in some countries than in others?
• What are some different livelihoods open to Tunisian youth during
this period, and what are the positive or negative aspects of each?

• At one point Meriem tells a taxi driver that he’s “scared from watching too much TV.” What is the role of the media in supporting the ruling Ennahdha? Do the media play a bigger or smaller role than one might expect in the events that unfold?
• How does the presence of mobile technology serve both to both boost activism and heighten political tensions? 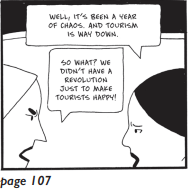 • What is the relationship between the economy, tourism, and political unrest?
• What type of organizations outside of Tunisia seek to exploit religious and political divisions for their own purposes?
• In what ways do the tragic deaths of the migrants recall conditions elsewhere in the world, either currently or in the past?

• How important is free speech to the anti-government movement? What groups leverage it effectively?
• Are mass protests a form of free speech? When might they not be?

ACTIVITY: The Power of Silence

Spark a creative response to any of the book’s many silent passages by inviting students to provide word balloons, thought bubbles, or captions for them. Alternately, you can provide practice in visual literacy by having students give think-alouds to a partner or small group that share what they’re thinking and feeling as they move through a sequence of panels. 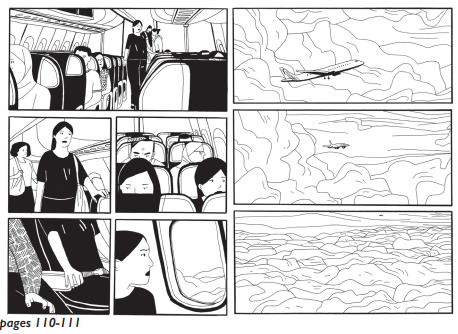 FOR FURTHER READING AND VIEWING

The theme of young people’s aspirations in a period of national turmoil is expertly conveyed in Fatima’s Sharafeddine’s award-winning, Lebanon-set The Servant (2010).

Frontline: Revolution in Cairo is an informative and powerful documentary that is available both on DVD and as streaming video at the PBS website.

A Note on Language.

Those using After the Spring in a classroom setting should know that it occasionally contains coarse language. As with all reading material, we suggest you preview it with an eye to your institution and readers.